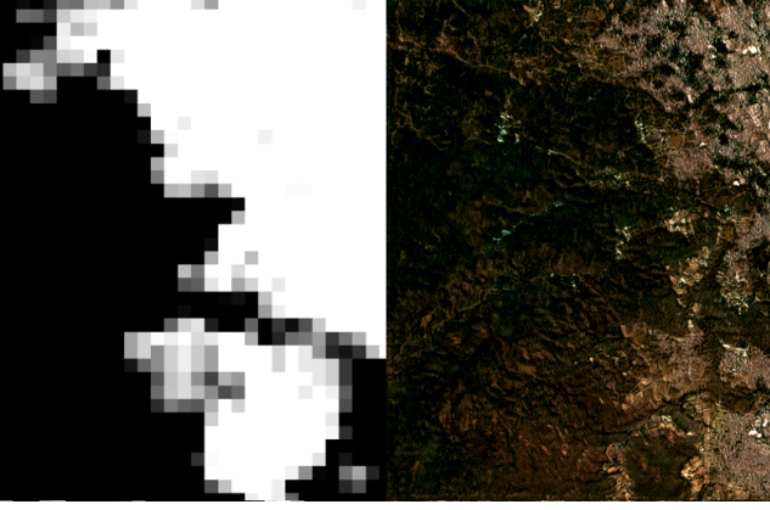 Iacopo Testi is an italian urban technologist and data scientist. His professional and academic interests revolve around the development and applications of data science methodologies to transform urban environments into sustainable and seanseable cities.

Satellite data represent an important source to comprehend the underlying forces that shape our urban areas. Furthermore, the advent of artificial intelligence pushes the boundaries of what can be achieved with remote sensing imagery. In this article it is presented a compendium of the research [1], conducted by Intuition Machines, Osir and Max Planck Institute researchers, that shows generative artificial neural networks potentials applied to European Space Agency (ESA) Sentinel-2 image data.

Two datasets are mainly utilized for the entire investigation. Satellite imagery is derived from surface reflectance data from ESA’s Sentinel-2 mission [3], which is a constellation of two satellites, collecting images at 5 day revisit. The second data source is the Global Human Settlement population data (GHS-POP) for the years 2000 and 2015 from the European Commission’s Joint Research Centre [4].

The aforementioned data, properly sampled and processed, are used to train the artificial intelligence model, called by the researchers “Spatial Conditional Generative Adversarial Network” (SCALAE). In fact, the network architecture consists of an adversarial latent auto-encoder (ALAE) [5] modified with a spatial conditional style module (SCS) [6] and its encoder input. The SCS addition is utilized to feed the population map conditional information to the generator. Additionally, the discriminator receives the conditional information as an input, therefore providing a learning signal based on the similarity between the generated image and the ground truth population map.

The figure above shows the prediction accuracy, based on the gridded population map (center), of the generated image by the artificial intelligence model (right). As visible, the GAN model utilized by the researchers generates a Sentinel-2 image with a predicted urban configuration. Furthermore, the methodology can be scaled and used to visualize how other urban areas would appear with alternative population distribution in climate change scenarios.

Finally, the investigation unveils the prospective of generative adversarial neural networks to assist city planning departments, practitioners and decision makers. Specifically, simulating speculative land use, land cover and other planning scenarios with responsive and economical procedures. Concluding, if we think about all areas around the globe threatened by climate change [7], we can certainly recognize the prospects of artificial intelligence models applied to the urban planning domain.