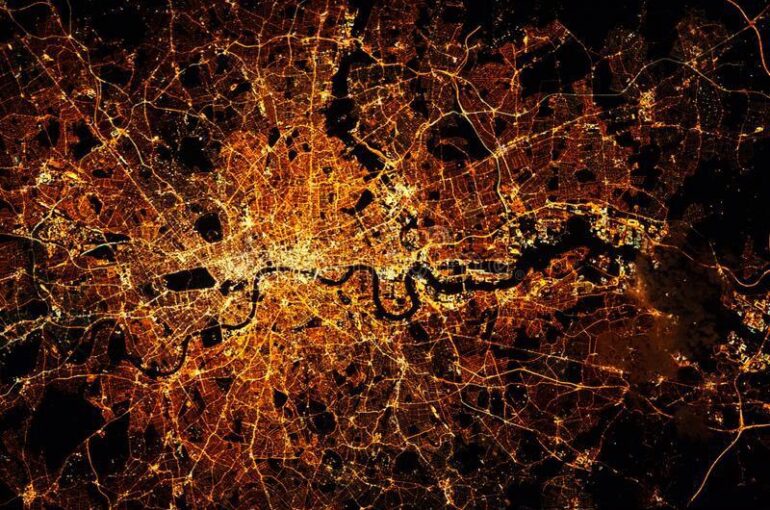 One year ago, I went on an artificial intelligence (AI) world tour. This journey aimed to answer one question: can AI help us build sustainable cities? In other words, inclusive and dynamic cities respectful of the environment. To answer this question, I explored 12 cities and met 130 entrepreneurs, scientists, and experts around the world [1].

During this project, I gradually understood the huge potential and the risks of AI for our cities. But as my encounters and explorations progressed, unexpected questions came to me: What if the way we dwell in cities could show us how to build better social media? What if our built environments could reveal how to better design technologies? What if urban wanderings could tell us how to explore the web?

Indeed, it’s remarkable to observe the resilience of cities in the face of the political, social and technological disruption that have taken place throughout our history. Cities have not only resisted this perpetual change, they made it possible and liveable. They succeed in what Hannah Arendt called one of the main challenges of humanity: creating a common world for different generations [2]. In a nutshell, cities support and empower our civilizations for centuries. This success, how imperfect it may be, should help us better design the digital world and new technologies.

First observation from those who look at a city is that it’s a space where people live peacefully together. Citizens cohabitate, collaborate and share infrastructures daily. Thus, millions of singularities interact harmoniously in a remarkable way.

Now let’s imagine a new kind of city. A city where people would insult and injure you at any time, where some group of men could steal from you or force you to work for free just because they are stronger, where some people could enter your “home” and steal anything they want from as there are no property laws. It would be a “war of all against all”[3] rules by the only law of the stronger. Actually, such a city would not even exist as men and women couldn’t gather.

As surprising as this description looks, this is what’s currently happening in our digital spaces. Hate speech are increasing on social media, we have no ownership of our data and we do not even have access to our digital footprint (which, however, generates a huge economic value for others). It looks very much like what Thomas Hobbes called a “state of nature”.

What Hobbes taught us is that the first step to get out of the state of nature and towards a society is the creation of a social contract. To trust each other, people must agree around a political common project. For Hobbes, this political project must lead to a monarchy but for other philosophers, as Jean-Jacques Rousseau, social contracts can establish a democracy. What will be of interest here is not so much the political outcome as the deliberative process by which a people agree on a mode of governance. This agreement begets some laws and customs which are the cement of the social fabric. Only then, people can become citizens who will construct what Richard Sennett calls, using a french world, a “cité”[4]. A cité ‘ doesn’t represent a city’s built environment (this is what Sennett calls the “ville”) but its uses and people. In other words, a cité is a common space coined by people who share interests and values. We could say that a cité is the materialization of a social contract.

So here’s our first urban lesson: before building a city we must create a cité. And before creating a cité we must agree on a social contract.

We can easily see that very few digital spaces follow this principle. Most of the platforms and social media we’re using are following rules that have been decided unilaterally. You can accept them or leave the digital place. But that’s not how a social contract or even a cité works

A cité is built from “an accumulation of small interventions that contribute to a feeling of “this is also my city”” (Saskia Sassen). If we transpose this logic to digital spaces, we obtain open-source softwares, contributory platforms (as Wikipedia) and decentralized social media (as Mastodon) which are the closest current examples for a kind of social contract around technology. In these places where the hacker ethic prevails [5], contributors can say “this is also my digital”.

In Building and Dwelling: Ethics for the City, Richard Sennett unveils that cities work as long as the “ville” echoes the“cité” and vice versa. In other words, when our built environment embodies our history and embraces our customs. This idea has also been beautifully expressed by Saskia Sassen when she describes ’’the capacity of the material to make itself visible”.

We could say that a material is visible as long as it tells us a kind of truth, no matter its nature. It can be historical, personal, or even philosophical. For example, it’s happened when you see a place which expresses a piece of your country’s history, a bench that reminds you of your first kiss with your partner or a statue which illustrates the human condition. This urban dialogue between the city and its inhabitants make it readable and, most of all, liveable.

Technologies as sensors and algorithms are functioning in the opposite way. They are all invisible. In order to create a frictionless and user-friendly experience, technologies have been designed to be imperceptible. While in a city the built environment is telling something to you, with invisible sensors/algorithms you’re the one who’s unintentionally telling a personal truth (your political preferences, sexual orientation, localization; etc.). This dehumanising relationship between digital infrastructures and citizens has something of Valdrada, the city imagined by Italo Calvino in his Invisible Cities:

“Thus, the traveller, arriving, sees two cities: one erect above the lake, and the other reflected, upside down. Nothing exists or happens in the one Valdrada that the other Valdrada does not repeat, because the city was so constructed that its every point would be reflected in its mirror, and the Valdrada down in the water contains not only all the flutings and juttings of the façades that rise above the lake, but also the rooms’ interiors, with ceilings and floors, the perspective of the halls, the mirrors of the wardrobes. Valdrada’s inhabitants know that each of their actions is, at once, that action and its mirror-image, which possesses the special dignity of images, and this awareness prevents them from succumbing for a single moment to chance and forgetfulness”

Similar to Valdrada, our behaviors and personalities are reflected in a lake — a data lake. With the significant difference being that we have no access to our reflection.

Following the urban dialogue principle, sensors and algorithms should be at least visible. Instead of creating frictionless technologies, we should make interactive ones which empower our singularity. For example, by having access to some of the knowledge that algorithms have about us by aggregating our data. This means that we’re not only asking to see what’s behind the algorithm (or the sensor), we also want to make it readable.

This principle emphasizes the necessity to work on interactive and visible interfaces between human beings and technologies. Interfaces which materialize data and make them sensible.

From wandering to deviating algorithms

When you succeed in merging harmoniously the cité and the built environment, you have a city. Such a city is characterized by its ability to produce liberty, at least on an individual level.

Streets, squares and public spaces in general are spaces of encounters and exploration. Encounters with other individuals and explorations of new cultures. Whether through street performances, shop windows, monuments or even just a face [6]… the city dweller is constantly under the temptation to deviate, in the literal sense of diverting from a trajectory. And, much like the epicurean clinamen [7], this deviation gives rise to freedom. The freedom to amble and roam new imaginary worlds. The freedom to undertake and break free from social determinism. The freedom to interact with unexpected people.

This is why cities are lands of opportunities. They give you the possibility to evolve, to become who you are.

Social media and platforms are functioning in a radically opposed way. The more you use them, the more you’re locked in an echo chamber (or filter bubble). This is not only dangerous by polarizing our societies, it’s also alarming as you can no longer explore new possibilities and ways of thinking. Deviating behaviours, that make the evolution of societies and species possible, are standardised by optimised algorithms.

That’s interesting to notice that these over-optimised algorithms are making wandering impossible in cities. Mesmerised by their smartphones, individuals turn into “smombies”[8] impervious to their environment. This phenomenon is so important and dangerous that some cities, such as Seoul, have even been forced to build lighting infrastructure to encourage “smombie” to bring back the attention to the street.

Following the wandering principle, we should create deviating algorithms. It means algorithms that would show you contents in contradiction with who you are and what you believe. Not always, but just enough to give you the possibility to explore something else than yourself. This principle can be generalized to almost all industries which are using recommendations to show you contents and products or to suggest you some connections. We would probably stay less time on such platforms, but it would enable us to become better human beings and more empathetic societies [9].

I’ve tried to synthesize how some urban properties could help us make liveable digital spaces and humanist technologies. We could call this process of exporting urban principles towards the field of digital and new technologies, “urbanization of technologies”.

If social contracts, urban dialogue and wandering can lead to urbanized technologies[10], many others are to be discovered: Eli Pariser recently wrote an article about online parks, French think tank hérétique raised awareness about the dangers of our smartphones by representing them as a city called “Algoville” and architect Pierre Bernard imagined how Baron Haussmann could inspire engineers and designers. Initiatives are growing and we are just at the beginning of this tech urbanization.

Obviously, this urbanization process has limitations as digital gets their own specificities. This is why it’s not about building “digital cities” (which would be nonsense), but taking inspiration from the history of the cities and urban planning to make our technologies liveable.

This urbanization is more than ever necessary as digital is threatening our social fabric while new technologies are making our cities uninhabitable. People and territories are increasingly morphing into data to serve algorithms. It’s time to reverse this paradigm. The challenge is huge, but we have with us hundreds of generations to succeed.

[1] : The insights and discoveries of this project are freely available in URBAN AI Report.
[2] : An idea mainly developed in Between Past and Future
[3] : Leviathan, T.Hobbes
[4] : Building and Dwelling: Ethics for the City, R.Sennett. Using the French language, Sennett distinguishes two urban realities : cité (people and their customs) and ville (the built environment).
[5] : The Hacker Ethic and the Spirit of the Information Age, Pekka Himanen
[6] : The theme of the face as an invitation to stroll in the city has been developed by Louis Aragon in Aurélien
[7] : In Epicurean physics, clinamen refers to the deviation of atoms from their vertical fall into the vacuum. This clinamen breaks “the laws of fatality” (Lucretia), generates the meeting of bodies and gives birth to freedom
[8] : Suitcase word formed from smartphone and zombie to refer to city dwellers who are constantly looking at their phones
[9] : Alex “Sandy” Pentland also showed that algorithms that enable exploration improve economic efficiency in Social Physics and in Beyond the Echo Chamber
[10] : The concept of “urbanized technologies” initially from Saskia Sassen.

This article was first published on Medium:
https://medium.com/swlh/its-time-to-urbanize-technology-141fa5580574